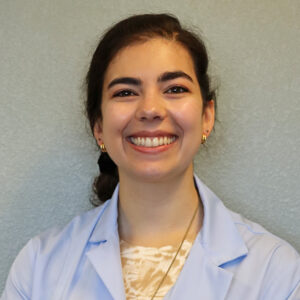 Kayla is a fourth-year veterinary medical student from the University of Wisconsin-Madison and will graduate in the Spring of 2022. She’s from Shelby Township, Michigan, a suburb of Detroit, and knew from a young age she wanted to work with animals. According to Kayla, the spark first came when she would take long fishing trips with her parents.

“I would catch crayfish from the river, put them in buckets, and make little habitats for them,” Kayla said. “I would watch them all day long during those fishing trips.”

Kayla also mentioned that having pets of her own and forming that human-animal bond is what also inspired her to pursue a career in animal medicine. Growing up, Kayla had several goldfish and a Wirehaired Pointing Griffon dog named Dusty.

She received her Bachelor’s in Biology from the University of Michigan before attending vet school. During her high school years, Kayla volunteered with the local Humane Society where she helped socialize the animals. She also helped run a fundraiser to gather pet supplies for shelter animals.

During her undergrad in Michigan, Kayla volunteered at Mackinac Island as a carriage driver and tour guide; she helped take care of two teams of draft horses that she drove around the island. Kayla has also volunteered with the University of Michigan’s lab animal medical program where she shadowed researchers who looked into different methods of enrichment for various animals, including rats and sheep. She’s also worked with a small animal emergency and primary care clinic where she worked as an animal care specialist. During her time in vet school, Kayla volunteered with a program that spayed and neuter barn cats at local farms.

Kayla said she interested in almost everything there is to know about animal medicine, but she really enjoys dentistry and emergency and critical care. She said she heard about the externship program at Craig Road from Jenny, a fellow classmate and former extern at Lone Mountain.

Kayla said she’s most excited to get hands-on experience outside the classroom and to find her niche in the world of animal medicine, as well as gaining more experience with different exotics. She said she’s also looking forward to learning more about alternatives for pain management, such as laser therapy and acupuncture.

Welcome to the team, Kayla!