Dr. Jarred of Lone Mountain Animal Hospital explains the origins of Pit Bulls including common misconceptions of the breed.

The breed originated in the 19th century in England by crossing English Bulldogs and other terriers known as “bull & terriers.” In the 1860’s Pit Bulls were brought the U.S.for use as family guard dogs  and for herding livestock. There are many myths and negative stereotypes surrounding the Pit Bull Breed. Much of this negative press is the result of bias media coverage, and reporting of false non-scientific data and incorrect breed identification. Often, non-pit bull type dogs (mastiffs, other terriers, etc.) are identified as “pit bulls.”

So what exactly is a Pit Bull? 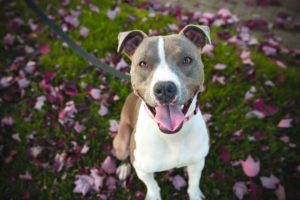 Pit Bulls were not always so feared by the media or the public, and in 1914-1918 were deemed “America’s dog” and used in World War I to sell war bonds and recruit for the US military.

Where did this negative image of the Pit Bull come from?

In 1987, a sports illustrated article was written deeming the Pit Bull a “vicious animal” – citing numerous human attacks, referencing their supposed extreme aggression, and inability to be integrated into society.  Taking any emotions you have about this breed out of the equation – if you look at the actual statistics Pit Bulls are not more dangerous than many other large dog breeds.

While the influence of genetics on certain aspects of a dog’s personality cannot be denied, deeming an entire group of dogs inherently dangerous is simply unfair. This is directly related to the high numbers of pit bulls being admitted to, and euthanized in animal shelters across the country. These are family oriented, loyal, energetic dogs that with proper exercise and training (like any dog) make wonderful companions.  I urge my clients to be responsible owners, regardless of breed, and consider facts versus fiction when choosing the right dog breed for you and your family.