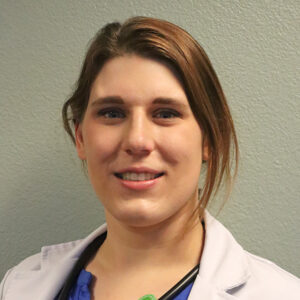 Please give a warm welcome to Jenny, the newest extern to join the Lone Mountain Animal Hospital team.

Jenny is a fourth-year student at the University of Wisconsin School of Veterinary Medicine and will graduate in May 2021. She will also be joining the Lone Mountain Animal Hospital team as a full-time doctor in June after she graduates! Jenny is a Wisconsin native and said she’s always been interested in research and hands-on work. As she continued her education, Jenny realized she enjoyed the hands-on work more.

“I chose veterinary medicine because I wanted to have the applicable, hands-on biology that I liked, and then going through vet school, I realized this was my calling – this was my passion,” she said.

Jenny received her Bachelors in Conservation Biology from the State University of New York College of Environmental Science and Forestry, located in Syracuse, New York. She took a two-year gap period after graduating to complete her pre-requisites for veterinary school. During this time, Jenny worked for a local clinic and volunteered at a wildlife rehab center.

In regards to her internship, Jenny is most looking forward to gaining her footing as a future veterinary medical professional at Lone Mountain.

In her spare time, Jenny enjoys spending time with her animals and doing puzzles. Jenny is also a big “Harry Potter” fan; she has several pets, including an 11-year-old Chinchilla named Fred, a dog named Charlie, and a cat named Minerva. Jenny also has four Minnow fish and two Cory catfish.

Welcome to the team, Jenny!